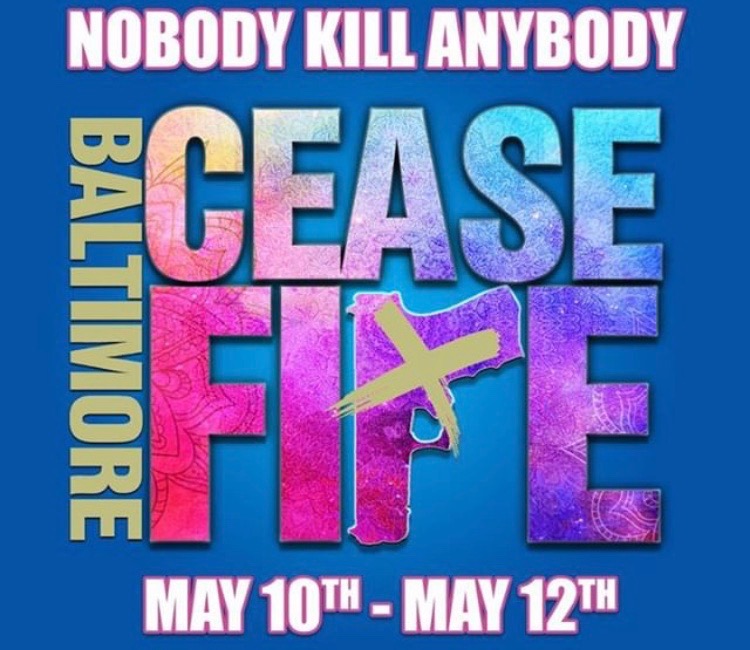 On the last Monday of April, organizers with Baltimore Ceasefire held a public meeting in Park Heights. For unfamiliar readers, Baltimore Ceasefire is the result of a peace challenge that started on August 4th, 2017. The ultimate goal is for everyone in Baltimore to commit to zero murders not only during sacred weekends but each day of the year. Every 3 months or so, the group hosts weekends where a simple call is made: “nobody kill anybody” and is a response to gun-related murders in the city.  It’s no secret that Baltimore has one of the country’s highest murder rates relative to its population. It’s a history that has become such a part of Baltimore’s story that you can not name this city without getting looks or gasps from someone. Our city’s murder rate continues to climb, each year beating the record it set the year before. Yet those of us born, raised or drawn here know the other faces of the city: the warmth, strange beauty, uniqueness, strong working-class roots, and varied cultures that make our city what it is. Though some people are leaving by choice or through displacement, there are still many actively fighting to uphold our city in it’s highest regard. Baltimore Ceasefire is a group of caring and disciplined people at the frontlines of this rising.

The meeting was a gently framed talk of how gun violence connects to other conditions. Some of these include long-held and narrow ideas of manhood and a lack of healthy coping mechanisms for living with recurring trauma. Along with these social factors, we talked about the systems and structures that make these interactions even tenser. Some examples include a shortage of economic opportunities, especially for people without higher levels of schooling, hunger and poor nutrition, blight, mass incarceration and exposure to toxic building materials like lead paint chips that can also pollute the air. We were able to see and say how all these experiences relate so we could keep forming ways to rid our neighborhoods of these ills.

One action toward this goal was a movie night and conversation that Baltimore People’s Climate Movement hosted with Baltimore Ceasefire. The first Friday of May, a crew of us met up at the No Boundaries Coalition to watch “Finding Justice,” a multi-part documentary that aired on recently aired on BET. The creators travel across the United States to expose inequality as lived by black Americans; episode 6 features our dear city. It has clean camera angles and includes input from famous black Americans. It was helpful to learn more about the history of the city and the past policies that shaped our present day. Many questions, thoughts, and solutions were shared amongst us viewers, who represented multiple parts of the city. One woman, Angel, shared a different perspective on the lead paint discussion, asking researchers to follow up on the studies done on children to see how or if they are affected as adults. Wildly different parts and people are going into our forming a just world, and the Ceasefire events were proof that trust and sustained effort carry us toward peace.